Written for: The Fiction Fountain 4 Aug 2019 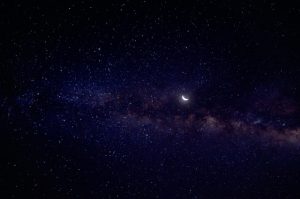 Photo by Min An from Pexels

Frank ‘Cooter’ Ross looked at his books, trying to find information about first contact. Where the hell is it? He thought. I know there is some information here somewhere.

“What’s going on Frank?” said the female voice over the computer line. “You went quiet and started grumbling.” The voice belonged to Cathy Sorenson, the spacecraft mechanic at the far end of the drive section of the Hootie Bird.

“Oh,” she answered. “Part of your alien’s on the Moon conspiracy.”

“Yeah I heard it. But don’t you think it’s a couple of spacers with too much time and too many choices of drugs.”

“What if they’d been sober?” asked Cathy.

“It’s important that we find it way out here.”

“Yeah, it’s the initial transmission of significant power that could be detected by an alien civilization.”

“Captain Cooter can you explain for all us Earthlings? Those are over two hundred years old,” Cathy said.

“Oh. I forget that signals travel slower than the warp drive. We’ve out ran the radio waves from back then. So -”

“We’re out in the cold zone,” Cooter said.

“It’s the zone where any contact with aliens will occur without them having prior knowledge of our existence.”

“Cold,” said Cathy, “since we’ve not given them any time to warm up to the idea.”

Cooter heard Cathy laugh as he adjusted the high gain antenna to point directly at the Union Transatlantique des Nations vessel, as the low gain pointed at the only inhabitable planet in the system. They had been sent their to check out the planet and possible UTAN colony being built on the planet. Many other nations had their eyes on the planet, but wanted the extents of the UTAN colony established before committing their own resources. Consequently, Cooter was hired to take a look.

Hootie Bird made for a good scouting vessel. Many Moon based spacers had taken to building and operating them after the discovery of Alcubierre metric based FTL warp drive. The basic asteroid prospector ship design that had been operating for decades provided the perfect design that could use the drive. Many were fully automated, surveying the thousands of systems brought into range by FTL. Few, like Hootie Bird, were classic crew-of-two roid-rompers.

Cooter had hired Cathy and commissioned a new vessel shortly after the discovery. He decided that he would go to the stars to look for aliens rather than scour the lunar surface to look for the alien base he believed was there. He’d spent decades with nothing to show for it, so he opted for a different search.

“Frank?” Cathy asked, continuing to refuse to call him ‘Cooter’.

“I’ll need at least thirty minutes before I can restart the reactor.”

“Okay,” Cooter noted. “Another forty-five before the drive is ready, then.”

Cooter looked at the potential missile launches and travel times from the UTAN planet and vessel. He noted that they were safe from the planet, but some of the possible shots from the vessel were marginal. It all depended upon the fuel in the vessel’s tanks. They could make a large burn and put Hootie Bird into a missile’s flight envelope.

Cooter nervously monitored the clock and listened. No news was good news. He waited, hoping for some more chatter from the UTAN. He wanted to know more about these Aliens the vessel had reported. Could it be true? Had they made contact?

“I won’t,” Cooter said, burning a significant part of their fuel. “You’ll get a bonus if you can make the twenty minutes on the reactor.”

“That pulse came from the planet,” Cooter explained. “That burn will put us outside of any of their firing solutions. They’ll have to tell the vessel to target us – they’ll have to maneuver to shoot. I hope to engage the warp drive before that happens.”

After five minutes, silence continued on the radios. Laser communications, he thought, the tight beam would be impossible to intercept. They’d be getting instructions from the planet. Maybe ten minutes, they’d burn to get a firing solution.

Cooter looked through the scope, pointed at the last position of the UTAN vessel. – still there. No evidence of a burn.

The minutes ticked off…

Cooter glanced at all the controls. No messages from either the UTAN vessel or colony. No flare of engines engaging, nor the launch of a missile.

“Nuttin’ Cathy,” Cooter said at length. “Status on the reactor.”

“I can finish or talk, Frank, your choice.” Cathy said.

Cooter looked again. There was no activity. “It’s just like I would do it.”

“Make us doubt everything that had occurred.”

“Three more minutes on that reactor.” Cathy said, “Give me time to get out of here before you fire up.”

“Sure,” Cooter said. “They just made us believe and disbelieve the alien first contact at the same time. A true cold contact.”