The article below contains spoilers.  I recommend that you read Morgan's Road first. 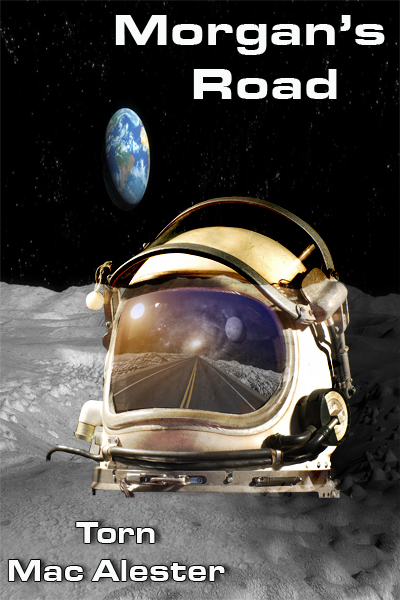 Morgan’s road began as a story about the lunar regolith. Regolith is essentially lunar dust. Because of repeated bombardment by objects ranging in size of mountains to microscopic grains, the Moon’s soil has been beaten down into tiny dusty grains. This dust is everywhere, and as experience by the crews of the Apollo landings, it gets onto everything. Most of the sample containers returned to the moon did not seal properly. There was significant contamination of the soil by the atmosphere of the spacecraft and later the Earth’s atmosphere [1].

The moon’s lack of atmosphere has ensured that any disturbance of the regolith will last for years. In fact, the disturbance in the regolith associated with the Apollo missions remains to this day. The lunar reconnaissance orbiter LRO imaged each of the Apollo landing sites, showing the tracks left by the astronauts and lunar rovers[2].   Morgan’s road extends this idea of long lasting or permanent tracks. Nelson will be able to track Morgan back to his secret—the ice that allows him to survive on the moon. The tracks associated with Morgan’s crawler would be a permanent record of every place that Morgan visited, including the source of the ice.

The moon held a secret until long after the Apollo missions had concluded. In fact, the scientific paradigm of the era held for a dry moon. Use of radar from the Earth, and the flight of the Clementine mission past the moon revealed hints of water ice existing in the permanently shadowed creators of the lunar poles. Later missions, notably the LCROSS mission, confirmed the discovery [3].

Part of Morgan’s Road deals with the economics of spaceflight and lunar exploration specifically by looking at Lunar supplies. Supposing that water was never discovered on the Moon, any water used by the people on the Moon would have to be shipped there. Including water and oxygen, twenty-five thousand pounds of supplies are needed to support one person for one year on the moon. To put that in perspective, that is about the mass delivered to the surface by the Apollo Lunar module. So, that would mean that the equivalent of a Saturn V launch every year to support one person on the surface. To make this viable, the support costs need to be reduced by in situ resource utilization ISRU [4] capability and the ability to recycle the water [5].

In Morgan’s Road, Nelson pays approximately a hundred dollars a gallon for water. The price seems extreme, since enough water for a person to survive a month would be fifteen hundred dollars a month. This would seem almost unsustainable for all but the richest individuals going to the moon on their own dime. But it’s even more financially difficult than that. The price per gallon in Morgan’s road has to be heavily subsidized. For example, to put a pound of payload on the moon for Apollo was over seventy thousand dollars. So at ten pounds per gallon, it would cost Apollo seven hundred thousand dollars to ship a gallon of water to the moon. Even the most aggressive schemes in the modern era suggest that the price per pound to the surface of the moon would be about a thousand dollars.  Morgan’s Road shows that unless there is a significant shift of the burden of resource management, an unsupported population on the lunar surface is difficult to achieve.

Though it makes for a good story, Morgan’s secret is hardly a secret to us. The moon has water and some interesting mechanisms for gathering it. It also has been a surprise to find water in the lunar soil at equatorial latitudes. This discovery, using the moon mineralogy mapper and the Cassini space probe, changed all perceptions of the moon. The existence of this water is a major game changer for the economics of space flight [6]. The water can make propellant, which changes the cost function for activities in cislunar space, since that propellant does not come from Earth.