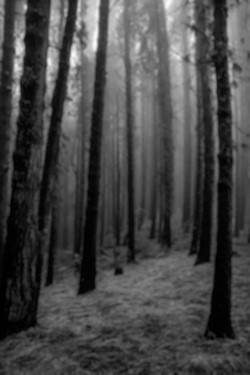 I sighed, looking at the grey landscape, trying to estimate the direction to the cabin. I abandoned the mountain, like everyone else, when the ash fell. They didn’t expect us to get a lot, but they encouraged everyone to move south if they could, and I could. I loaded the jeep and headed down the mountain and headed south to New Mexico with a relative. After about six weeks, I’d worn out my welcome, and I returned home.

Now I was back, driving up the twisting road toward the cabin. I saw the other abandoned homes along the roadside. I glimpsed lights in one house. One of my neighbors had returned, or perhaps never left. I remembered the house from before. They had painted it a vivid pink, something that I thought broke with the wilderness. But now, it was dull gray with only a hint of its previous color. It was grey, like everything else. Grey like the Moon.

She pushed the door open as I rounded the corner, so I put on the brake, pulling the Jeep to a stop. I rolled down the window as she walked over the ash toward the road. Ash caked her coveralls, and she wore a bandana and what appeared to be safety goggles.

“Howdy,” she said, waving and approaching the road.

“Oh, you’re from the upper road. I didn’t see you come down.”

“Yeah, but I’ve been away for several weeks.”

“Yeah, let me catch my breath.”

“I was wondering if you were headed up. I’m out of gas, and I need to go check on someone.”

“Thanks,” she said. She opened and entered the passenger door and settled herself.

I sneezed from the sudden blast of ash.

“You need to put on a mask. Keep that dust out of your lungs.”

“The ash is killing all of us,” she said. “Best keep it out of your lungs else they turn into cement.”

“How much ash fell?”

“Damn what a mess. The forest looks like they have painted it grey.”

“What’s worse is that it is supposed to rain or snow soon.”