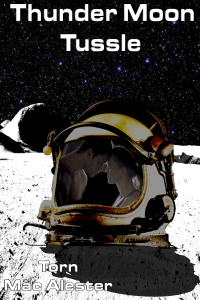 A new novel by Torn MacAlester

Nils Carmike glanced at his friend Milton Johnson across the table containing a half empty fifth and two covered glasses with straws. They took a seat in the corner of the Conrad Station Hotel Bar to avoid the other patrons.

“Yes, it is,” Milton answered. The late night meant that most had departed, leaving only the bartender Alex.  He was busy watching the stream of the Ducks and the Avalanche battling a third-period two-two tie. “Even Alex seems bored with the game.”

“Yup.” Nils confirmed again. Over Milton’s shoulder, Nils saw the skylight from above, shining the blue beam of Earthlight onto the bar’s dance floor.   The beam shined on two remaining patrons locked in an embrace. They were tourists, Nils noted, because of their awkward movements and that he had never seen them before.

Milton picked up his glass, drawing another taste of the drink through the straw. Nils did so, wishing that he could drink out of a glass in one-sixth gravity. Someone told him once that it had something to do with the surface tension of the liquid overwhelming the gravity. Nils watched Milton savor the liquid. Milton set his drink aside and spoke plainly. “You’re still telling stories to tourists for drinks?”

“It’s better than paying my own bar tab. Have you seen these

“Still, it’s ridiculous. I hope you’ve retired that silly story of me discovering ice.” Milton grumbled as he drew the back of his hand over the three-day-growth of gray stubble covering his face. Though Nils had known Milton to have gray hair for years, he could not recall the man ever looking so haggard.

“It isn’t you,” remarked Nils.

“Yes, I know.” Milton shrugged. “It’s some guy you named Morgan Johnson. You should at least change the last names. It might confuse some people.”

“I made it up on the spur-of-the-moment. The people wanted a prospector’s story.”

“It's one of the crowd favorites.” Nils answered, wondering about his friend. Perhaps it was his imagination, but he never remembered Milton so disheveled or seeming so irritable. Something was going on.

“I cannot believe you're still telling that fabrication to tourists.”

“It’s what they enjoy,” Nils replied.

“Regardless, I can’t believe you made up that nonsense.” Milt picked up his glass, “Come-on, I left you an ice sample in a lunch pail?! Then you track my ice down by following my tracks all over the lunar surface!?”

Nils shrugged. “They seem to like it. Besides, Alex wants fun rather than reasonable.”

“It’s silly! You should tell the actual story,” Milton grinned.

“Seriously,” Milton answered. “It would make a far better story.”

Nils looked at his drink, knowing it was a joke. They both knew the story of what happened up north should remain unknown. Glancing to Alex and noting that the barkeep remained engrossed in the game, Nils lowered his voice. “What did you need?”

“I’m heading down to Tycho,” Milton answered in an equally quiet tone, “but I might have a job for you in a few days. Will you have the time?”

“I’ve got a few things going,” Nils responded. “I can clear my calendar if needed.”

“Good,” Milton smiled. “In the meantime, try to stay clear of that deputy.”

“Always,” Nils replied, knowing he had no intention of going anywhere near Deputy Miller.