Nelson awoke with a start. Blinking, he looked around the interior of his lunar homestead. In the dimness, he saw a call light at the entrance to the airlock. He leaped from his bed all the way to the airlock and pressed the answer key. “Yes?”

“Its about time,” said a garbled male voice. “Can I come in?”

Nelson looked at the exterior feed and saw a spacesuit–clad figure at the airlock’s outer door. The man held a patch cord that hooked into the homestead’s intercom. The spacesuit itself showed signs of typical prospector use – dirty up to the knees and elbows.

Behind the figure, he saw an old–style crawler that had seen better days. He recognized it as similar to a broken–down crawler abandoned near Conrad Station. As he fought off the fog of sleep, Nelson realized that he did not recognize the individual. He asked, “Who are you?”

“The name is Morgan,” answered the man’s voice. “Can I come in?”

Nelson hesitated, failing to remember meeting a prospector named Morgan. Over the past three years, he met many prospectors, but Nelson also could not remember anyone mentioning Morgan. Most of the prospectors knew each other, at least by reputation, even though they kept to themselves. It bothered Nelson to not know of Morgan.

The unwritten rules of the prospectors insisted upon not going to someone’s homestead uninvited. Morgan was Nelson’s fourth guest – the first uninvited. Curious, he wanted to know why this strange prospector felt willing to break the rule. “Sure.” Nelson cycled the airlock, allowing the outer door to be opened. 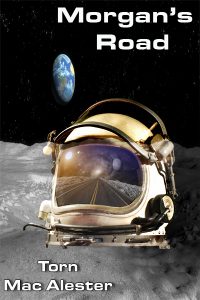 Morgan’s Road is a free short story by Torn MacAlester.

There are no reviews yet.

Be the first to review “Morgan’s Road PDF” Cancel reply